An Introduction to Golf Betting Golf fans who have never bet before will likely be surprised by the large selection of bets that are available. Golf games take longer than most those of other sports, and there is plenty of action happening on the field which provides bookies with the perfect opportunity to offer exciting bets on every single detail in a game. The premier golf tournaments that all fans enjoy are the US Masters, British Open, US Open and the PGA Championships, which feature all of the top ranking golfers.

The bets available on these games can range from simple outrights to very specific bets such as whether there will be a bogey on hole 4. The more important tournaments will have more betting markets and therefore fans will have a huge amount of choice. Of course, it is also possible to bet in the less prominent tournaments, but the range of bets is likely to be more limited. 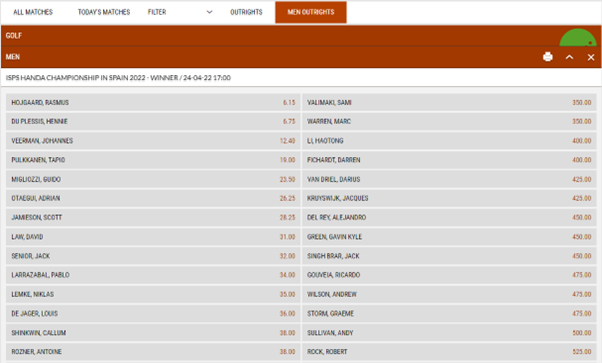 These bets can be placed on any of the contestants to win the tournament. Moneylines very much the simplest and most popular bet. In games where there is a large field of contestants, such as any of the four major tournaments, the odds on individual players may be higher than in most other sports. This is because the number of entries in those particular competitions are over 100, and so there will be more possible outcomes than that of a horse race or formula 1 race. Odds offered on the clear favourite to win may even be as high as 6:1, which means that punters can win with the same odds that would be offered on the underdog in many other sports. Moneylines are popular amongst punters because they do not require any specific score or for the player to finish in a certain way.

Each way bets are similar to bets on which player will win, only they also come with a certain insurance. The each way bet acts like two bets, where half of the stake goes on the player to win and the other half goes on a bet where the player has to come in the first 4, 5 or 6 places. This means if the golfer wins the tournament the bet pays out in full, but if they only come in 4th 5th or 6th place, half the bet will be paid out with the odds offered for the place. Each way bets will specify which places will still pay, this bet can vary for different tournaments.

Versus the Field Bets

This bet is exclusive to golf, and when it is offered it can be quite an exciting bet to place. The punter singles out one or multiple golfers and then places their money on any of the other contestants to win. There are many different possible outcomes in a game of golf which means that even if the punter singles out the two best golfers in the game they will still have high odds to win.

This bet may be available only in the final rounds, which means that fans should pay close attention to see which players lead the initial rounds. The odds will be the highest on the final day or round of the tournament, and as long as the leading player does not win, this bet will pay out.

This bet is a great way to back players that may not have a chance of winning the tournament. In this bet, two golfers are chosen and punters can place their money on will perform better. The rest of the players are irrelevant. The punters who can benefit from head to head bets are the ones who know the individual players well and have watched them play many times. Punters who can recognise early signs that may indicate which player will win between two top players may put their knowledge to the test and take advantage of this bet. As this bet is reducing the competition to two players, the odds will be shorter, but at the same time this may be easier for bettors to predict as there are only two possible outcomes.

As golf tournaments are usually drawn out over several days, punters will be able to place bets at any point during the course of a game. This can be an attractive option to punters who want to see how the players fare over the first few holes, or even rounds, before they commit to betting on one of the players. The odds that are provided on the live bets will be constantly updating as the game unfolds. If one of the golfers takes the lead, the odds on them winning will shorten and conversely if a player starts trailing then their odds will lengthen. Some tactical punters wait before placing their bet, and hold on until they are offered longer odds. This is a risky strategy as it requires the golfer in the bet to trail, but in the early stages of the game this may happen.

There may be offers for betting on the winners of each round. These bets are also highly popular amongst punters because they may be easier to predict than the winner of the overall game. If the bets are separated into rounds it also means that the bets will pay out quicker than the bets on the full game, and the punter will be able to place more bets on their preferred player.

With the higher profile tournaments, there may be even more bets offered. These may be bets that solely relate to game statistics or on specific events to happen during a game, or they can be specialised bets that relate to a certain player's performance.

There may be bets on individual players to place in the top 5, 10 or 20, meaning that multiple bets can be placed at once without contradicting each other. This allows fans to bet on more than one of their favourite players, though the individual bets will have lower odds than bets on which player will win the tournament.

There may be bets that relate specifically to scores, including which round will have the highest score, which round will have the lowest score, will a certain player achieve the highest score in one of the rounds and more. Player specific bets can include bets such as whether a player will be a wire to wire winner (which means they lead the competition in all rounds and win the competition), whether a new player will be the winner in a first time winner bet, will a player finish the tournament with an overall score under par, and more.

How To Research Bets

Predicting games of golf can be tricky, especially when there are numerous contestants. There are many different factors that can be taken into consideration when placing golf bets.

One important thing to consider is whether the course is better suited to the long hitters or short hitters, are there any turns or tricky areas that certain golfers may struggle with and so on. When it applies, it can be useful to check which golfers have a better record on the course. There are some golfers who do exceptionally well on particular courses, which will definitely influence the odds and can be useful for punters too. Of course there are also more general factors that may affect a player's performance such as their run of form, where they place in the world rankings, whether they have any other advantages such as playing in their home country and so on.

The more of these factors you are able to consider, the better your chances of placing winning bets. While nothing is guaranteed, hopefully the above tips will help you place numerous successful golf bets.