Tennis is a fast paced sport full of action and often, exciting twists and turns. Tennis fans will look forward to the Grand Slam tournaments each year as well as the other tournaments organised by institutions such as the Association of Tennis Professionals, or ATP, and the Women’s Tennis Association, or WTA.

Betting is a way of adding even more excitement when watching tennis matches. There are many different types of bets that are available for each game, with the options to combine them in parlays, and it is even possible to bet live during a match.

The more high profile tournaments, such as the Grand Slams, often have extensive betting opportunities. However, even when betting on the relatively minor tournaments, it is not unusual to find a huge number of markets on offer.

There is a selection of standard bets, or bets that can be found for almost every single tennis match. This includes matches between lower ranking tennis players and even qualifying matches for the Grand Slam events that are played by up and coming tennis players.

Spreads can usually be found in the five set format matches, where punters can place bets on one of the players to win by a margin. These bets are useful because they can lengthen the odds on the favourite to win, or they can be used to back the underdog with a positive spread that reduces the chance of losing.

An example of a positive spread is +1.5 on the underdog. In this bet, the underdog only has to win 2 sets for the bet to win. The odds on the underdog will be higher without the spread, but the risk is also larger.

This bet works the same way as the sets, but focuses the number of games each player wins. By breaking the sets into games, the bookie can offer more ranges of spreads. There may be game spreads such as 5.5. 6.5. 7.5 and so on.

Total sets is a bet that does not relate to who will win the match, but instead focuses on the number of sets that will be played in the match. Depending on whether the match is played in a best of three or five series, there will be different bets offered.

These bets, when offered, use the same system as the total sets but they relate to the number of games won across all sets. Like the spreads games, there will be more options for punters to pick from, such as the match to end with over/under 20.5, 21.5, 22.5 games and more.

Bets can be placed ahead of time but there are also some bets that are available to place during a match. These options are great for punters who want to see a bit of the action before they commit themselves to their bet. One thing to note is that the live bets are always offered with live odds. These odds are updated in real time, so if the favourite goes ahead early in the match, the odds offered on them will be even shorter than before the match began. The odds will fluctuate during the course of the game, so punters should either try to place their bets early, or they may want to wait for an opportune moment when the odds on their bet are higher.

Parlays are where bets are combined to create even larger odds. Any bets can be combined, as long as they do not contradict each other. From the main bets, a match winner and number of sets is a popular parlay bet. When placed individually, these bets may bring large winnings, but in a parlay the odds are multiplied against each other, making the winnings even larger.

For a parlay to win, all bets must come through, which makes it more risky, but they have the potential to be hugely rewarding bets. 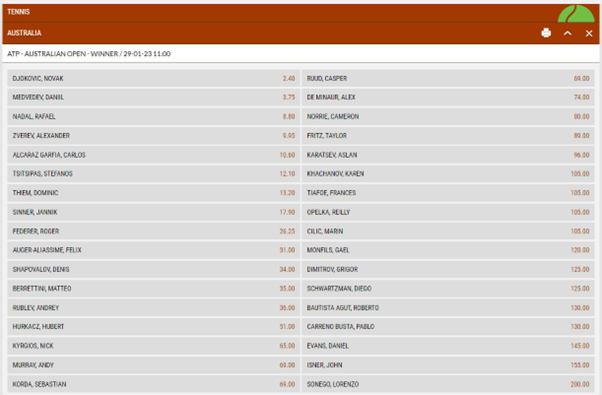 For major events, there may be even more bets available for each match. These can be far more specific and therefore more difficult to predict. There may be more event specific bets such as how many aces will there be in the match, will one of the players serve a double fault, will one player be able to come back from 2-0 down and so on.