Learn How to Bet on the NFL American football is not just a hugely popular sport in America but it has a worldwide fanbase that enjoys watching the highly thrilling regular season matches as well as the playoffs and Super Bowl. Fans or sports punters are spoilt for choice when it comes to betting on NFL games. The wide selection of betting options gives punters numerous opportunities to place winning bets on each game.

Bets are available on all games across the NFL, covering the North, East, South and Western divisions of both the AFC and NFL conferences. Fans of particular teams will definitely be able to find bets for games in they play and by utilising all of the available betting markets, it is possible to construct some advanced betting strategies. 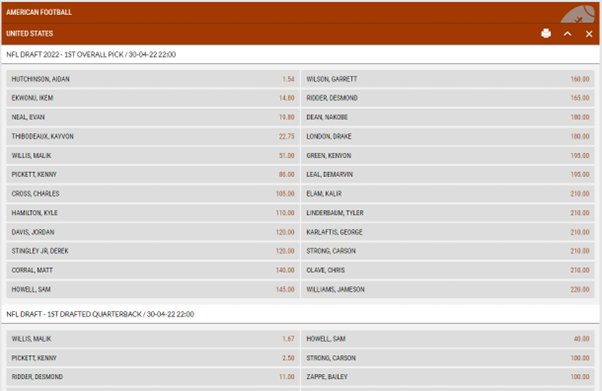 The simplest bet that can be placed is on which team will win the game. Punters may place a bet on either of the teams to win, and the odds offered will represent the likelihood of each team winning. The favourites can be easily spotted as they will have the shorter odds, whereas the underdogs will have longer odds.

When a punter thinks that the favourites will win the game by a large margin, they may choose to place a spread bet. Alternatively, if the punter wants to place money on the underdog to win the game, they can also use a spread to reduce the risk. In a spread bet, the favourite team is given a points handicap, lengthening the odds on them winning, while the underdog is given a points advantage, shortening their odds.

For example, if a punter wanted to bet on the favourites, team A, the market may specify a handicap of -5.5 points, this would mean that the team not only has to win the game but they should win by at least 6 points for the bet to win. The odds would increase as it is a more risky bet than placing a simple moneyline in which the team just has to win the game. In another scenario, a punter may back team B, the underdogs, to win the game but with a points advantage of +5.5. This bet will pay out if the team wins, or if they do not lose by more than 5 points. The odds will be shorter than a simple moneyline on team B, but the level of risk will be significantly reduced, making it a safer bet to place. The handicap given is known as the betting line and usually there will be several betting lines to choose from.

Totals are bets on how many points will be scored by both teams at the end of a game. The market presents a betting line, e.g. 40.5 points, and often there will be several to choose from. When placing a bet, a punter will be able to select one of the values, such as 42.5, and place a bet on the game to finish with either more or less points. If the punter places a bet on under 42.5, it will mean that the combined score of both teams at the end of the game cannot be more than 42 points, whereas if they place a bet on the game to end with over 42.5, the game must finish with at least 43 points scored between both teams. The odds for these markets can vary considerably depending upon the teams playing and the betting line. However, it is not unusually to see lengthy odds, which can make them very attractive bets.

Games can be divided into quarters or into halves. What this does is allow punters to bet on which team will win one of the halves or one of the quarters. These bets may come in useful for bettors who have watched the teams that are playing or have done their research and found that one team is particularly good at scoring points early on and going into the lead, or one of the teams likes to score a lot very late in a game. Quarters and halves also have the extra benefit of paying out faster than a bet on the whole match, as they only last for the duration of the chosen quarter or half.

Furthermore, it is usually possible to place other bets on specific halves or quarters, such as moneyline, totals and spread bets. As such, there are several more opportunities to win.

NFL games may have a lot of specials which can relate to various aspects of a game. When they are available, there are some bets that are more player related, such as will the player score in the game, will a player make a touchdown, will a player score a field goal, and many more bets.

There are specials that relate to game statistics, which can be particularly appealing to those who enjoy doing research and drilling down into the numbers. Bets such as correct score prediction, which teams will have the most rushing touchdowns, which team will open the scoring, how will the first points be won, which team will have the longest field goal, which team will score the longest touchdown, total penalties, total turnovers and many more. Some of these bets are two way bets between either team, meaning that there are only two options for the bettor and that can make it easier to predict. Other bets may be more difficult to predict because there can be many different possible outcomes, such as predicting the correct score, but in turn the bettor will be rewarded with some massive returns if they predict the right score and win the bet.

When the NFL season ends with the Super Bowl, many fans immediately start thinking about the next season. With the drafts and the return to training, there is plenty to follow in the offseason and fans can start placing their bets well ahead of time with the futures market. Also known as outrights, these bets relate to events that will happen at the end of the following regular season, or at the end of the following playoffs season. Bets such as which team will win each division, whether a team will make the playoffs, which team will win the AFL/NFL conference, which team will win the Super Bowl may all be available before the season even starts. There also may be certain player related outrights, such as will a player make the American Football League All-Star team, whether a player will be named MVP at the end of the season, whether a coach will be named most valuable coach at the end of the season and more. These bets may also be available during the season, but the odds will change after each week, to represent the likelihood of the player, team or coach winning the bet. The best odds for the futures bets can usually be found before a season starts.

Live betting is a fantastic way to engage with a game as it is taking place. Many of the bets discussed above can be placed during the game. However, the odds will be updated in real time to reflect what is happening on the football field. One thing that makes live betting particularly exciting is the ability to bet on the next thing to happen. For instance, you may be able to bet on the next team to score or the next player to score a touchdown. As a result, by keeping a close eye on both the action and the odds, it may be possible to spot some fantastic opportunities.

It is impossible to place a bet that is guaranteed to win, but you can greatly increase your chances by doing careful research. You will want to look at the teams’ recent forms, check to see if any players have been injured, consider their head to head records, and so on. You may also want to look at factors such as the weather and whether away team has had to travel a great distance and may therefore be fatigues. Hopefully by taking all of this into consideration you will be able to place numerous winning bets.